Less than three years after the popular uprising that led to President Hosni Mubarak’s ouster, and just one year after Egypt’s first free and fair elections, the democratically elected government has been overthrown and the Egyptian military is running the state.

And the Muslim Brotherhood—the secretive, long-outlawed Islamist group that came out of the shadows to win the presidency in June 2012—is once again being driven underground, its members killed and arrested in an army-led campaign to wipe it off the map.

Were the Brothers ever really in charge? Or was the Egyptian “deep state”—embedded remnants of Mubarak’s police force, Supreme Court and, most of all, military—in control all along?

In Egypt in Crisis, airing Tuesday, Sept. 17, at 10 p.m. on PBS (check local listings), FRONTLINE and GlobalPost’s Charles M. Sennott go inside the Egyptian revolution, tracing how what began as a youth movement to topple a dictator evolved into an opportunity for the Muslim Brotherhood to seemingly find the political foothold it had sought for decades—and then why it all fell apart.

“We’ve gone from the hope and high expectations of the 2011 revolution to the first free and fair presidential election in Egypt’s history to a return to military rule and a country more deeply divided than ever—all in less than three years,” says Sennott, a veteran Middle East correspondent (The Brothers). “This FRONTLINE documentary takes you deep inside these turbulent ups and downs.”

When Sennott was in Egypt reporting for FRONTLINE’s The Brothers in January of 2011, the Muslim Brotherhood had aligned itself with secular youth activists and was essentially holding the revolution’s infrastructure together.

“The young activists had no real leader,” Sennott says. “The Brothers were much more organized, so they stepped in, and they were the ones running the security checkpoints, serving hot tea, distributing blankets and running an emergency health clinic.”

But, as FRONTLINE reveals, the Brotherhood soon turned on its former allies, aligning itself instead with the Egyptian army and tolerating violent repression. Under the short-lived presidency of Mohammed Morsi, the military tortured high-ranking members of the opposition, subjected women to public “virginity tests” and conducted mass arrests of revolutionaries.

“We wanted our first elected president, who himself had been subjected to torture, who himself has come from a clandestine organization that was the prime target of police brutality, to stand up against police brutality,” Khaled Fahmy, a historian at the American University in Cairo, tells FRONTLINE. “Nothing happens. Not a single police officer was put on trial. Not a single investigation was launched.”

In Egypt in Crisis, FRONTLINE goes behind the scenes to find out how Morsi’s rule became increasingly unpopular, and explores the days and decisions leading up to his ouster at the hands of the military and his arrest on charges of inciting murder.

With Egypt’s hopes for democracy in tatters, and the military-led government violently cracking down on the Brothers, what will happen next?

END_OF_DOCUMENT_TOKEN_TO_BE_REPLACED

Watch “The Spill” on PBS Frontline

Over the past decade, BP vaulted from an energy “also-ran” to one of the biggest companies in the world, gobbling up competitors in a series of mergers that delivered handsome profits for shareholders. But an investigation by FRONTLINE and the nonprofit newsroom ProPublica shows that BP’s leadership failed to create a culture of safety in the massive new company. As BP took increasingly big risks to find oil and extract it, the company left behind a trail of mounting problems: deadly accidents, disastrous spills, countless safety violations. Each time, BP acknowledged the wider flaws in its culture and promised to do better. The FRONTLINE/ProPublica investigation shows that the rhetoric was empty. From the refineries to the oil fields to the Gulf of Mexico, BP workers understood that profits came first.

END_OF_DOCUMENT_TOKEN_TO_BE_REPLACED

Congratulations to all the nominees, along with PBS FRONTLINE executive producer David Fanning, who will be honored as the recipient of the Lifetime Achievement Emmy when the winners are announced this fall. You can watch all of the films for free on the PBS FRONTLINE website.

PBS FRONTLINE plans to re-air two Rain Media films, The Retirement Gamble, which first aired in April, and WikiSecrets, which aired in May 2011.

The Retirement Gamble will re-air on June 18. The film examined the reasons why so many Americans are finding it so difficult to retire.

WikiSecrets, which told the story of how the WikiLeaks website came in possession of hundreds of thousands of secret government documents, is scheduled to rebroadcast on July 2. The film examined the life of Bradley Manning, the army private who recently confessed to leaking the secret files. Manning, who is facing charges that include violations of the Espionage Act as well as aiding the enemy, is currently facing court martial.

Both programs are scheduled to air at 10 p.m. To check your local listings, click here.

On May 21, FRONTLINE also rebroadcast The Untouchables, a Rain Media production that investigated the reasons why no Wall Street executives have been prosecuted in connection to the financial crisis.

For most Americans, traditional retirement is now a pipe dream: Six in 10 people believe they’ll have to delay retirement, just 14 percent are very confident they’ll be able to live comfortably once they stop working, and 17 percent believe they’ll never retire at all.

Who is to blame?

The Retirement Gamble, airing Tuesday, April 23, at 10 p.m. on PBS (check local listings), is an eye-opening investigation of a financial services industry that may be draining your retirement savings with every passing year.

“This FRONTLINE film speaks directly to you, the consumer,” says FRONTLINE correspondent Martin Smith (The Untouchables; Money, Power and Wall Street). “It will help you understand both what is happening to your retirement money, and, most importantly, the questions you should be asking before investing it.”

Using his own retirement fund as a case study, Smith undertakes an investigation that has implications for every working American. Through interviews with Wall Street executives at the helm of the mutual fund industry, professionals of all ages who are trying to navigate the retirement crisis, and current and former financial advisers who may or may not have their clients’ best interests at heart, he investigates the rise of the 401(k)—a product Americans buy without knowing its true cost.

On any given street, one household may be paying 10 times as much to invest in a 401(k) as the household next door; Over the course of a lifetime, a seemingly low annual fee of 2 percent can reduce what your balance would have been by more than 60 percent—potentially adding years to your working life; Popular 401(k) providers often charge a plethora of hidden fees, burying them under opaque names like “Expense Ratio”; Many financial advisers are not required to provide advice that is in their clients’ best interest; they are only obligated to give advice that is “suitable”; and the best way to maximize your return might be to cut Wall Street out of the equation and invest in low-cost, unmanaged index funds.

Whether you’re just starting your professional career, or nearing what you hope will be your golden years, The Retirement Gamble is essential viewing if you hope to one day retire.

In The Untouchables, premiering Jan. 22, 2013, at 10 P.M. on PBS (check local listings), FRONTLINE producer and correspondent Martin Smith investigates why the U.S. Department of Justice (DOJ) has failed to act on credible evidence that Wall Street knowingly packaged and sold toxic mortgage loans to investors, loans that brought the U.S. and world economies to the brink of collapse.

Watch The Untouchables Preview on PBS. See more from FRONTLINE.

Through interviews with top prosecutors, government officials and industry whistleblowers, FRONTLINE reports allegations that Wall Street bankers ignored pervasive fraud when buying pools of mortgage loans. Tom Leonard, a supervisor who examined the quality of loans for major investment banks like Bear Stearns, said bankers instructed him to disregard clear evidence of fraud. “Fraud was the F-word, or the F-bomb. You didn’t use that word,” says Leonard. “By your terms and my terms, yes, it was fraud. By the [industry’s] terms, it was something else.”

Former Sen. Ted Kaufman (D-Del.), who was appointed to fill Joe Biden’s long-held Senate seat when he was sworn in as vice president in January 2009, was determined to see bankers in handcuffs. “I was really upset about what went on on Wall Street that brought about the financial crisis,” Kaufman recalls. “That doesn’t happen if there isn’t something bad going on.”

Yet Kaufman left office in late 2010 frustrated by the lack of criminal prosecutions. Jeff Connaughton, Kaufman’s chief of staff, remains convinced that the DOJ failed to make prosecuting Wall Street a top priority. “You’re telling me that not one banker, not one executive on Wall Street, not one player in this entire financial crisis committed provable fraud?” asks Connaughton. “I mean, I just don’t believe that.”

Smith asks Lanny Breuer, assistant attorney general for the DOJ’s Criminal Division, about his failure to criminally indict Wall Street executives. “I think there was a level of greed, a level of excessive risk taking in this situation that I find abominable and very upsetting,” says Breuer. “But that is not what makes a criminal case.”

Critics, including two high-level sources within Breuer’s own division and former New York Attorney General Eliot Spitzer, disagree. “They have not done what needed to be done,” Spitzer says. “The greater risk is that corrupt behavior that is damaging to our economy, that leads to something as enormously painful as the cataclysm of ’08, goes unaddressed.”

Money, Power & Wall Street, FRONTLINE’s four-hour investigation on the global financial crisis, goes inside the struggles to rescue and repair a shattered economy, exploring key decisions, missed opportunities and the unprecedented and uneasy partnership between government leaders and titans of finance.

In the first hour, produced by RAINmedia, FRONTLINE takes you inside the rapid rise of credit default swaps, including the voices of those who created them. With the real estate market booming, bankers successfully tweaked the credit default swap to bundle up and sell home mortgage loans to eager investors. But despite the money flowing into banks’ coffers, credit default swaps also loaded the financial system with lethal risk. And when the housing bubble burst, the credit default swaps — originally designed to stabilize the system — brought the global economy to its knees. Regulators, who had often stood on the sideline and allowed Wall Street to police itself, saw the ugly consequences rapidly unfold before them.

In the second hour, produced by the Kirk Documentary Group, FRONTLINE investigates the largest government bailout in U.S. history, a series of decisions that rewrote the rules of government and fueled a debate that would alter the country’s political landscape. It offers play-by-play accounts of several secret meetings that permanently altered the financial system.

Martin Smith and Marcela Gaviria were the winners in the Documentary – Other Than Current Events category for their film WikiSecrets.

Martin Smith and John Maggio were the winners in the News – Regularly Scheduled, Bulletin or Breaking Report category for their film Educating Sergeant Pantzke.

Both award-winning films can be watched for free on the PBS FRONTLINE website. Congratulations to all the winners, and especially to the producers at FRONTLINE who swept the entire Documentary and News categories for the night! 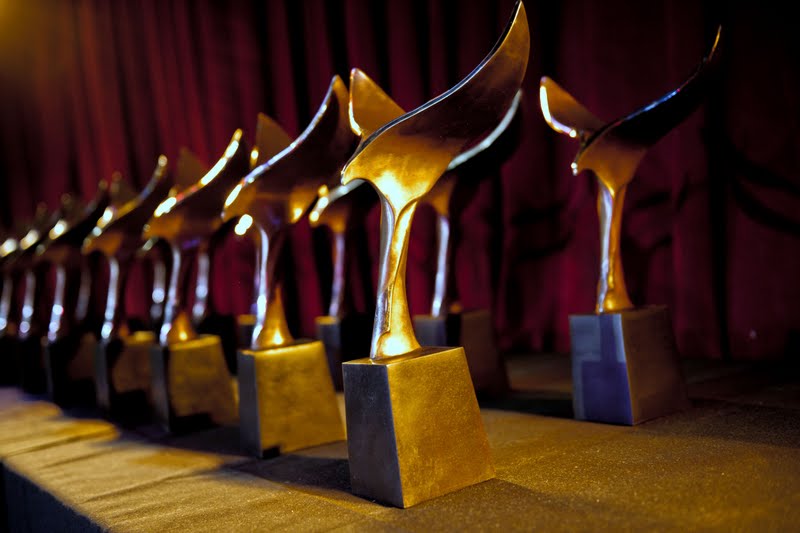